This is a historical page. Alas the Flying Dogs are no longer playing. If you contact me I’ll be glad to recommend other bluegrass bands. We got the name from our ten year stint at The Flying Dog Brew Pub in Aspen, Colorado. The band includes long-time valley musicians Sandy Munro, Steve Johnson, Randy Utterback, and Cash Cashman and represents more than a few years of performing concerts and other engagements in Colorado and Europe.

Although we’re primarily a bluegrass band, we have a strong interest in Celtic and Old-Time music and our performances reflect these influences. We’re available for concerts, celebrations, and parties of all kinds.

We can play with our PA system and create the exciting mountain party experience for wedding receptions, or show up with only our instruments for acoustic events. We can also provide the “Partial Dogs” for a smaller situation.

Our recording project is called “A Step Away”, for the title cut written by Steve Johnson who is also known far and wide as Steve. If you’d like to read the review from Bluegrass Unlimited Magazine, it’s down below. 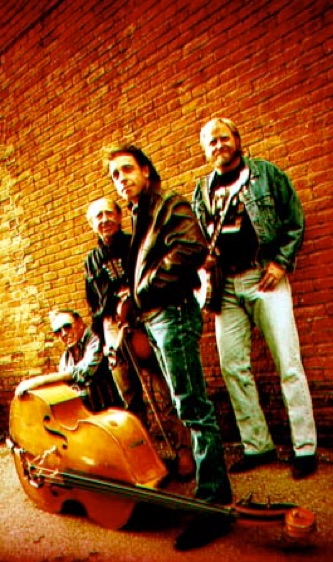 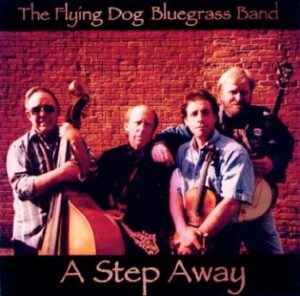 Ducks on the Pond 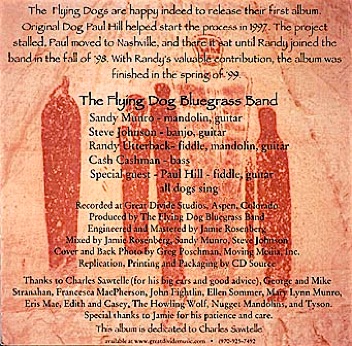 The Flying Dog Bluegrass Band, a quartet from Aspen, Co., is but one brilliant vocalist away from the upper reaches of the regional band level. As it stands now, and as their excellent first album, “A Step Away” shows, all four of them can sing well enough to get the job done in a reasonable fashion but none a standout lead vocalist. Of the four, Steve Johnson (banjo), Sandy Munro (guitar and mandolin), Cash Cashman (bass), and Randy Utterback (fiddle, mandolin and guitar), it is Mr. Cashman who has the most memorable style (they say with Hank Williams overtones, but I hear Jimmy Dale Gilmore). If the band is going to advance (assuming they want to), one of them, perhaps Mr. Utterback, who has a most pleasing voice, will have to step forward.

That said, that is the last even semi-negative comment you’ll hear about “A Step Away.” With it’s broad view blending of bluegrass with Irish, Spanish, and folk elements, this is a fine effort and one that should be popular with listeners of all types of acoustic music. There is razor-sharp soloing and tight ensemble work throughout this collection of straight-ahead bluegrass covers, folk-based originals and Celtic instrumentals, as exemplified on “Paddy Fahy’s Jig,” and it’s easy to hear that great care went into the arrangements; listen to the modal interplay on “You’ll Never Leave Harlan Alive,” for instance. Also impressive is the ease at which the band moves from the traditional bluegrass of “Last Old Shovel” to the New Riders of the Purple Sage feel of the title cut, to the lilting, Buddy Hollyish backing of Steve Johnson’s “One Summer Day,” never losing its edge.